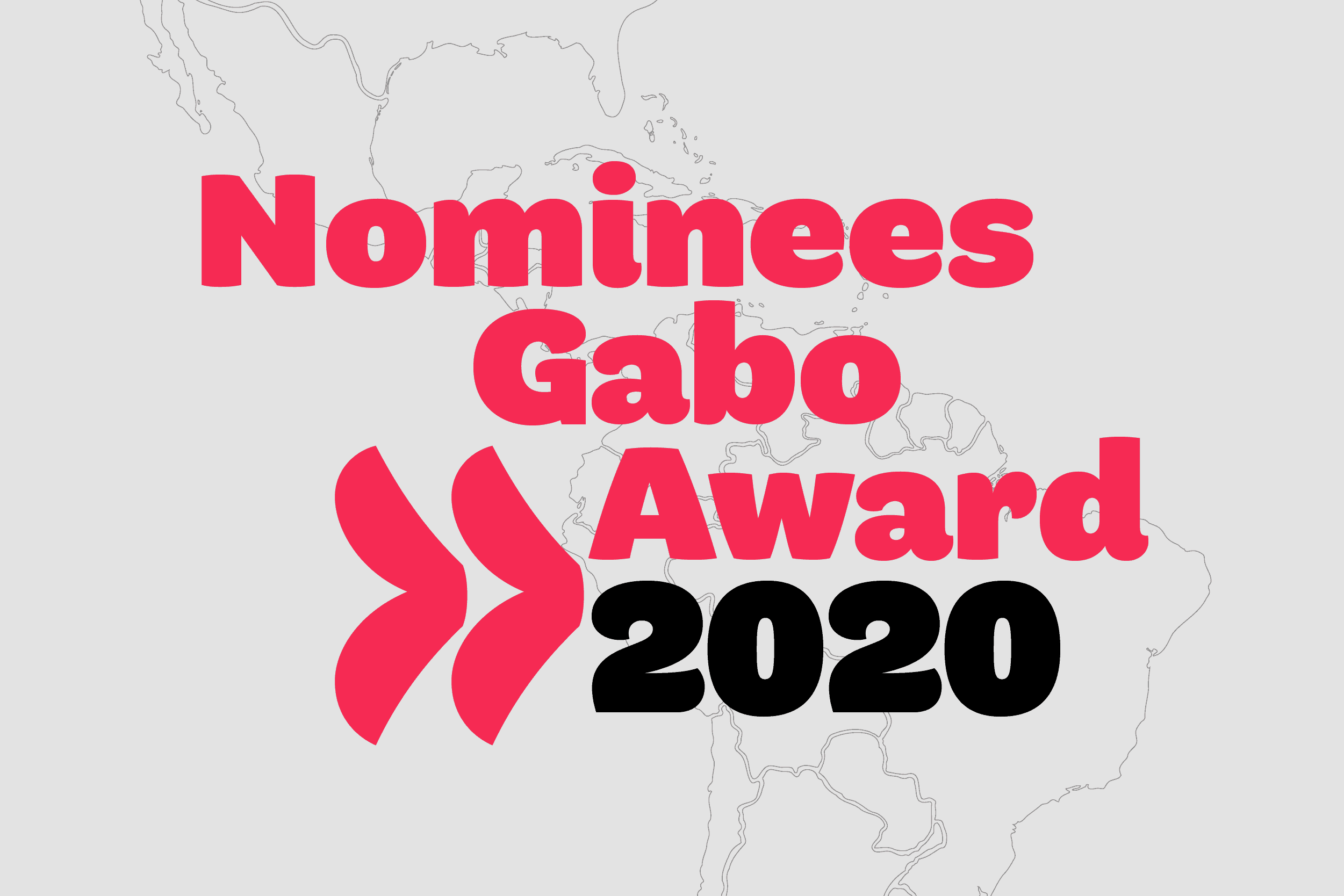 The Gabo Foundation, created in 1995 by journalist and Nobel Laureate in Literature Gabriel García Márquez, announces the 40 nominees for the 2020 Gabo Awards, the most important recognition for journalism in Spanish and Portuguese.

According to the judging panel of the 8th edition of the Gabo Festival, these pieces stand out for their solid research and reporting, high narrative and technical quality, and the ability to inconvenience authorities by portraying the complex realities of Latin America with depth, rigor, and ethics.

The top 40 stories—10 for each competition category: Text, Image, Coverage, and Innovation—were selected after 58 international journalists with extensive experience evaluated 1,443 pieces of journalism in three rounds of judging. The third and final round, made up of 12 judges, included members of the Gabo Foundation’s Governing Council, media outlet directors, communication experts, and experienced journalists.

The three finalists for each category are among the group of nominees, composed of journalists and journalistic teams from different Ibero-American countries. There will be four winners of the 2020 Gabo Awards from this final group of 12, which will be announced on January 21, 2021 in a virtual ceremony.

In addition to the ceremony, the traditional Marathon of the Best Stories in Ibero-America will also take place in January, including the 2020 Gabo Awards finalists and a judge from the final round giving details about their work in the profession. Both events will be held virtually at no cost to the participants. If you wish to attend, you can register here.

Below is a list of all the nominees for each category of the 2020 Gabo Awards, which can also be found on our website.

An in-depth profile of Magnolia polyhypsophylla, an unknown tree species that tells us about our relationship with plants and the plant world.

A report featuring a poor black, lesbian woman who managed to revert her marginality and turn it into a social good from the male transformism in Cuba.

A report that investigates the systemic problems of the U.S. private healthcare system, which are impossible for poor, racialized, and undocumented people to afford.

An investigation of “Memo Fantasma,” a high-ranking Colombian drug trafficker who has escaped justice and lives quietly in Spain.

A report that investigates and narrates the impact of nickel sulfide plus cobalt production on the lives of the inhabitants of a municipality in the Holguín province in Cuba.

A report on the wait and heart transplant for Hugo, a 15-month-old boy. It is the story of a new life that is summarized in 19 staples, the most beautiful wound in the world.

A report of the fight against the fear and fatigue of front line healthcare workers in Mexico.

An investigation that unveils the operation from the highest level of power in Mexico to unfreeze $500 million dollars for the main drug lords.

Portrait of the Rust Belt, a region crucial in deciding whether the most controversial leader in U.S. history remains in the White House.

An International Alliance investigating the smuggling of gold from conflict regions in Venezuela.

A report on the defenders of the forest and their struggle against the climate crisis in the Amazon.

“GIG – A Uberização do Trabalho,” (GIG – the Uberization of Work) published in the Brazilian outlet Globo News.

A documentary about “uberization,” the precariousness of work, and the progress of the “gig economy” in Brazil and the world.

Bilingual multimedia special on the extreme violence suffered by girls and women in El Salvador and how it is leading to suicide.

A visual report in memory of the Ixil victims of the Chisís massacre, at the dawn of a new process for genocide.

A project about the deadly passage to Europe taken by many refugees and migrants from Libya.

A piece of journalism that raises awareness about Venezuelan and Ecuadorian migration, in multimedia format with new narratives.

An audiovisual report that takes a night tour with those who collect the bodies of COVID-19 fatalities in Lima during the deadliest stage of the pandemic.

A documentary on how a conservative village became a shelter for a group of indigenous trans women in Colombia.

A photographic and multimedia essay that mixes photographs, audio and original music, and describes the overcrowding in Paraguay’s prisons.

A photographic essay on the Yazidi genocide that shows the past and present of a people condemned to oblivion in Iraq.

An investigation that shows the impact of illegal mining in Venezuela’s Canaima National Park, a UNESCO World Heritage Site.

A series of reports on the chronic kidney disease killing farmers on Central America’s Pacific coast and is being silenced by crop profits.

Coverage of the state of alarm caused by COVID-19 in Spain by eight Spanish photojournalists in eight different regions of the country.

An investigation reveals that in 12 years of war against drugs in Mexico the government only achieved 16 sentences for money laundering: they were the last link in the powerful business.

A multimedia documentation that narrates the field work of the Fifth Brigade for the Search of Disappeared Persons in Veracruz, Mexico.

A series of multimedia reports that travels to, explains, and tries to scrutinize the area connecting Mexico with Central America.

An examination of the scourge condemning the poorest in Latin America to financial slavery through loans with drug money.

A series of reports investigating the purchase, sale, and exploitation of water through eight stories in seven Mexican states.

Research series on the “Day of Fire,” a fire organized by farmers and businessmen that devastated the Amazon in 2019.

A collaborative project involving 10 countries, 21 media outlets, 31 journalists, 29 reports, and a database with 2,367 attacks against environmental defenders in Latin America.

Research tracing the origin of bullets in Rio de Janeiro after collecting cartridges from shootings in 27 neighborhoods in the metropolitan area.

It is a project that uses public data from the Brazilian National Congress to monitor women’s rights in the legislature.

This is the second-by-second reconstruction of the assassination of Dilan Cruz by a member of the Mobile Anti-Riot Squad in Colombia.

Funes is an algorithm that identifies the risk of corruption in public contracting in Peru, based on millions of data.

Center of intelligence that analyzes misinformation on social networks in Brazil through a monitor that collects information from more than 90,000 online publications.

Multimedia research on the La Modelo prison riot for Coronavirus that ended with the death of 24 prisoners in Bogotá, Colombia.

In four animations and a documentary, survivors narrate the Salvadorian civil war’s largest massacre and their fight against impunity.

A portrait of the unknown life of the King of Spain, Juan Carlos I, and the reasons why he decided to stop being king.