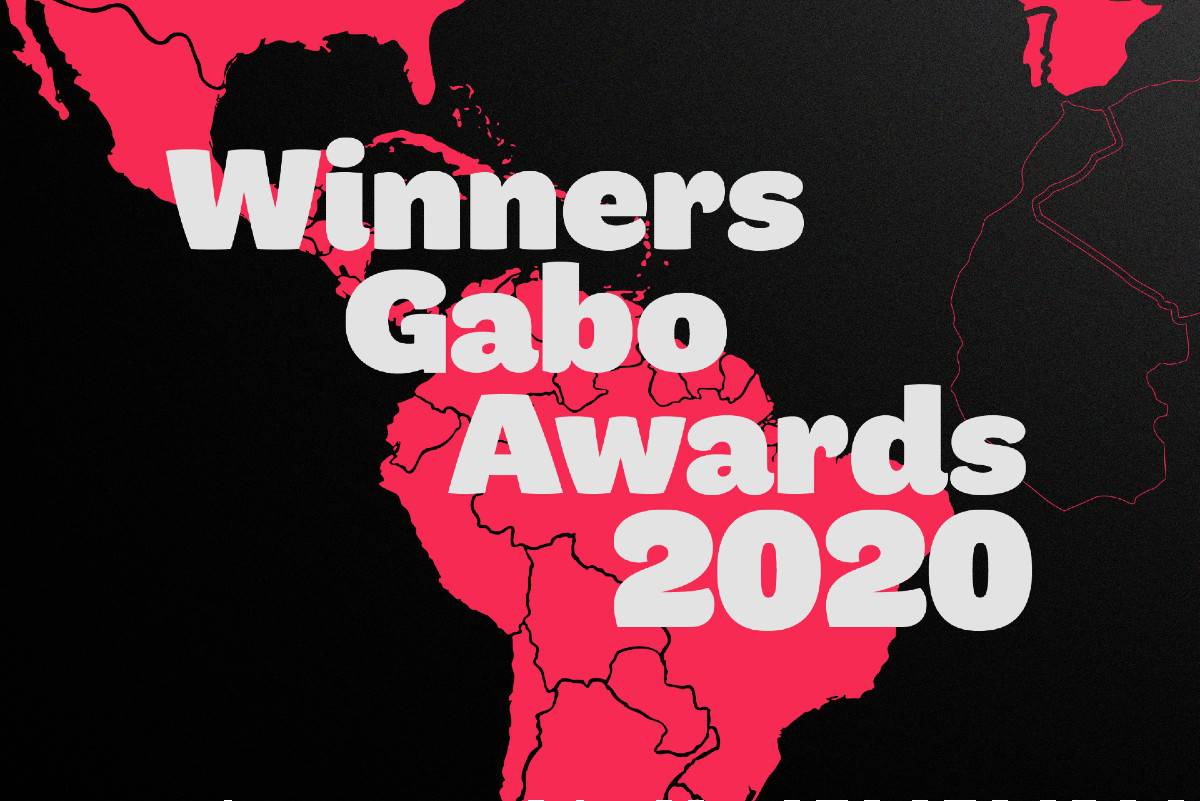 The Gabo Foundation—an institution created in 1995 by journalist and Nobel Laureate Gabriel García Márquez—announced this year’s group of award winners, which includes journalists, journalistic teams from several different Latin American countries, and transnational alliances, reaffirming the potential of collaborative journalism. The four winning pieces stand out for their excellent quality, extraordinary narration, in-depth research, and meticulous reporting. They are examples par excellence of relevant, rigorous, ethical, and innovative journalism; not only do they question the status quo and make those in power uncomfortable, but they also manage to make the the complex realities of Latin America come alive through individuals’ personal stories.

These pieces, considered the best in Latin America, were chosen following a three-round selection process in which 58 judges evaluated 1,443 pieces published between April 1, 2019 and June 30, 2020. They initially chose 40 nominees (10 for each category), then selected 12 finalists (3 for each category), and finally announced the 4 winners of the 2020 Gabo Award.

Below are the winners for each category of the 2020 Gabo Award, which can also be found on our website.

This piece combines field work and an in-depth statistical analysis to identify international smuggling routes, starting in Venezuela, and to show how Colombia and the Dutch Caribbean islands are used as a springboard for the minerals to reach their final destinations: the United States, Europe, and the Middle East.

Here are the reasons why “Venezuela, o paraíso dos contrabandistas” was selected as the winner, in the words of the Text category’s judges Sergio Ramírez (Nicaragua), Pilar del Río (Spain), and Santiago Gamboa (Colombia), as stated in the Judges’ Minutes for the 2020 Gabo Award.

This reportage has a geographical and continental perspective, which takes into account border conditions, that focuses on gold mining in the Amazon and its clandestine route from Brazil, the Guyanas, Venezuela, and finally Colombia. Along the way, the report shows the human side of one of today’s largest illegal businesses, and how corruption is so ubiquitous that it finds a way forward and silently crosses borders. This piece is extraordinarily well-narrated and courageously created, demonstrating dazzling originality. As an added value, it is available in several languages, prioritizing connections between Ibero-america and Portuguese-speaking countries. Although the piece is a fascinating text that stands on its own, the project also includes audiovisual content that makes the story even more powerful.

By Francesc Badia i Dalmases and Pablo Albarenga

This series of multimedia reports combines video and photographic storytelling with text narration and presents powerful drone images to tell stories that bring the climate crisis up close and personal.

The project portrays the symbiotic relationship between local communities and their land in the Amazon Rainforest—an invaluable global source of fresh water and biodiversity. It also serves to amplify the communities’ struggle and commitment, as well as convey their determination.

Ednei, Dani, Drica, Joane, and Tupi in the Brazilian Tapajós, along with Julián, Verónica, and Nantu from the Achuar territory in Ecuador, make up a powerful choral voice whose journalistic portrayal, in addition to narrating a harsh reality, aims to transform the jointly constructed narrative into both personal and collective empowerment.

The 8 episodes of “Defensores de la Selva,” produced in Spanish, Portuguese, and English, were published in full in El País, El País Brasil, and openDemocracy. They were also published as seperate pieces in The Washington Post, The Guardian, and Intium Media. ‌

Here are the reasons why “Defensores de la selva” was selected as the winner, in the words of the Image category judges Carlos Fernando Chamorro (Nicaragua), Carol Pires (Brazil), and Vasco Szinetar (Venezuela), as stated in the Judges’ Minutes of the 2020 Gabo Award.

This exceptional eight-part multimedia report shows the daily life of young people who play a role in defending and preserving the Amazon in Brazil and Ecuador. Thus far their work has been poorly documented or recognized and this project effectively substantializes the abstract issue of the climate crisis.

This piece stands out for its careful and powerful use of images as well as its clear rationale when narrating a topic that is currently extremely relevant. It also stands out for what is sure to have been an immense reporting effort; finding eight extraordinary characters and sharing their particular stories firsthand, based on their intimate relationship with the land, is very different from what had previously been published on the Amazon and the environment.

The following were also finalists in this category: “GIG – A Uberização do Trabalho”, published in Globo News, and “Las niñas suicidas de El Salvador” (In El Salvador, Violence is Driving Girls to Kill Themselves), published in Univision Noticias Digital.

This series of six reports, which combines text, photographs, videos, and interactive media, closely examines the strip of land that connects Mexico to Central America—the unknown border of the Americas, and one of the most forgotten and violent on the planet.

For six months, teams totaling more than 20 journalists from El País and El Faro worked to reveal the identities, conflicts, and questions hidden in places such as Tapachula and Tecún Umán, as well as other more inhospitable and remote places, including Xcalak, Ixcan, Bethel, and Laguna del Tigre. They narrated them in installments and in multiple formats in order to illustrate the mosaic formed by Mayan Indians, Garifuna and Miskito communities, and white Mennonite settlements across Central America, Africa, and Asia, large areas of legal and illegal crops, poverty and inequality, continually shifting political powers and armed groups, as well as countries that are falling apart along their borders.

Here are the reasons why “Frontera Sur. La frontera desconocida de América” was selected as the winner, in the words of the Coverage category judges María Elvira Samper (Colombia), Liza Gross (Argentina), and Rosental Alves (Brazil), as stated in the Judges’ Minutes of the 2020 Gabo 2020 Award.

More than 20 journalists from El País and El Faro media outlets collaborated on this high-profile piece that reveals the dramatic complexity of Mexico’s southern border. Thousands of Central Americans fleeing poverty or violence in search of better opportunities cross the border every year. Additionally, a good part of the drugs that arrive in the United States cross this border.

This piece goes beyond the traditional approach of covering cartels or criminal groups and instead delves into the reality of the communities that live and work in a forgotten, unknown, and violent region. “Frontera Sur” is a risky journalistic adventure that uses stories and personal testimonies to humanize the reality of small marginal populations in an extensive and pervious area where illegal and traditional subsistence economies coexist.

Frontera Sur skillfully combines revealing texts, videos, photographs, and infographics that immerse the reader in the geographical areas reported by the journalistic team.

Radar Aos Fatos is an intelligence center that monitors disinformation on the coronavirus pandemic in Brazil, in real time. The team, made up of journalists, linguists, and data scientists specialized in disinformation, monitor more than 90,000 publications on social networks per week and apply an algorithm to classify each one according to their quality of information. To collect the content, the Aos Fatos team created a Python script and a data set with more than 400 websites, 7,000 Twitter accounts of politicians and government officials, more than 600 public Facebook pages, and more than 650 YouTube pages and public WhatsApp groups. Radar Aos Fatos has produced 10 analyses from March 2020 to date. One of the most influential analyses monitored more than 1,500 tweets published by parliamentarians and revealed that the federal deputy and former Minister of Citizenship, Osmar Terra (MDB), shared the most disinformation about the coronavirus, followed by Jair Bolsonaro’s allies, deputies Eduardo Bolsonaro (PSL) and Bia Kicis (PSL).

Here are the reasons why Radar Aos Fatos was selected as the winner, in the words of the Innovation category judges Emilia Díaz-Struck (Venezuela), Mario Tascón (Spain), and Natalia Viana (Brazil), as stated in the Judges’ Minutes of the 2020 Gabo Award.

This platform makes outstanding use of artificial intelligence to detect and display trends and patterns of misinformation in social networks. It manages to identify hundreds of thousands of records of misleading information that would otherwise be impossible to counter. It also has the added value of being a constantly evolving mechanism that can respond to new forms of disinformation.

In a country where the use of disinformation as a political tool is on the rise, Radar Aos Fatos demonstrates an innovative use case of artificial intelligence that produces such outstanding and relevant journalism that it makes those in power uncomfortable.

If you would like to relive the public talks from the 8th edition of the Gabo Festival, which was held virtually last December, please visit our YouTube channel.